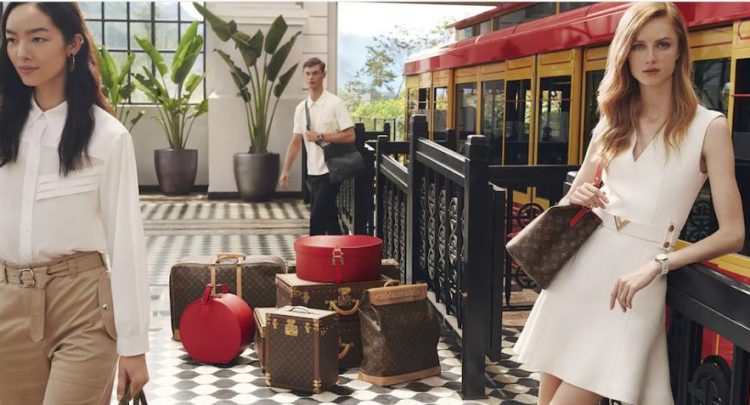 The famous monogram was created to tackle the problem of the counterfeiting of the brand’s image in 1896. Almost 130 years later and Louis Vuitton is still copied around the world.

It all started in 1821 with the birth of Monsieur Louis Vuitton.  At age 15, he started his apprenticeship at a box and packaging workshop in Paris.

It was a trade he excelled at and he was eventually appointed personal box maker and packer to the wife of Napoleon III, Eugenie. This was a prestigious position and involved packaging her clothes for transportation around the royal palaces.

After marrying and aged 33, Louis Vuitton set up his own eponymous workshop taking with him an elite group of customers.  A sign outside the workshop read;

“Securely packs the most fragile of objects. Specialising in packing fashions.”

Louis Vuitton worked at this trade all his life and when he died in 1892 aged 72, he left control of the business to his son Georges. It is Georges we must thank for the famous monogram. At the time the canvas consisted of a simple red and beige design for trunks and luggage so in 1896 Georges created the monogram which incorporated his father’s initials along with floral motifs.

Here, we’d like to take a moment to appreciate just a few of the beautiful pieces that have born the LV livery with aplomb including some of our own BagButler luxury rental pieces.

Here, we’d like to take a moment to appreciate just a few of the beautiful pieces that have born the LV livery with aplomb including some of our own BagButler luxury rental pieces.

Timeless is perhaps an overused word in fashion circles but entirely apposite when describing the most favoured monogram in the world of luggage and bags. Harking right back to the days of transatlantic ocean liners anything created from the LV house canvas and bearing the LV letters still carries that whisper of elegance and style, whether that be on a bracelet or a limited edition soccer ball from the 1998 World Cup held in France.  This one was signed by Elizabeth Taylor.

BagButler has chosen to include the Speedy Bandoulière in its collection. This incarnation of the original Speedy was introduced in 2011 and is differentiated by vertical leather trims at each end of the bag and the detachable leather shoulder strap. The Speedy acquired its iconic status in 1959 when Audrey Hepburn requested that it be made in a 25 size. Sixty one years later that status remains intact.

If it is good enough for Audrey Hepburn…..

Referencing the hat boxes used in days gone by the Boite de Chapeau Souple designed by Nicolas Ghesquière in 2018 is still trending (when available!).  We are very pleased to have purchased this luxury piece for our collection where it will remain for some time.

Of course being crafted from canvas the monogram pieces have lent themselves to creative reimagining’s such as the 2018 collaboration with Grace Coddington and featuring her Persian cats along with Nicolas Ghesquière’s dog.

The House tradition of fabricating packaging and boxes for precious items continues. 2010 saw the first LV produced case for the FIFA World Cup and on the current website you will find incredible craftsmen made pieces for containing afternoon tea accoutrements, a hairdressing trunk as well as classic hatboxes, trunks, suitcases and holdalls and not forgetting handbags.

“A bag designed with taste will always be in fashion, whereas a so-called fashionable bag may be perfectly unprepossessing”

During the Covid-19 pandemic it is a pleasure to report that Louis Vuitton is currently using several of its workshops (including the atelier at the LV headquarters on the Rue du Pont Neuf in Paris) to produce hospital gowns and masks which will be donated to healthcare workers.